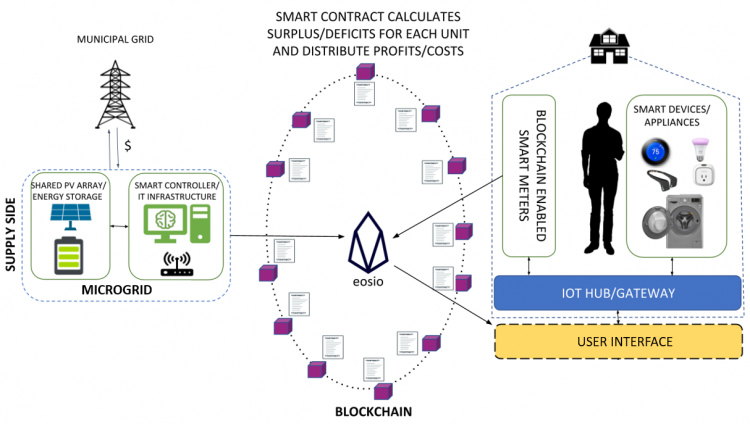 The decentralization of infrastructure is critical to long term urban resilience and resource equity. Current centralized models are prone to single point of failure and distribution inefficiencies that lead to waste. Often this wastefulness is exacerbated by mismatches between resource availability and demand at large scales. The proliferation of renewable energy technologies in the past decade has paved the way towards a more diverse and decentralized infrastructure, especially with respect to solar energy. The decreasing cost of solar energy has led to Energy Information Agency predictions of 14% total production from PV by 2050 with 47% of that coming from small scale systems. This trend will continue to create a significant supply of energy from distributed energy ‘prosumers’ (DEPs) that both produce and consume electricity, often in a net-metering arrangement with the central grid. Demand response (DR) programs help to balance the load profiles of these DEPs with intermittent renewable energy production, but with only limited success, and many of the recent blockchain-based DR programs depend on the Internet of Things (IoT) devices that are not installed or accessible in most households. They also depend on increasing demand during periods of higher renewable production which is inherently wasteful, and decreasing demand during periods of lower production, which has behavioral implications that are not adequately addressed.

Dendrological Infrastructure (DI) is defined here as the decentralization of critical infrastructures such as food, waste, energy, water, and information to approximate the functionality of a tree in the forest. It is an inherently circular economy seeing as nature knows no such thing as waste. Trees are autotrophs, meaning that in satisfactory conditions they can produce and store enough energy to survive without consuming other sources of food. Mycorrhizal networks (MNs) are made up of complex interwoven connections of fungal hyphae present in all terrestrial biomes that connect the roots of plants to help them exchange water, energy, and nutrients. They represent the capacity for resource exchange between “autotrophic” solar buildings that “photosynthesize” their own energy with photovoltaics (PV) and thus form the basis of a distributed, household-based, dendrological infrastructure. The houses become the trees, photovoltaic panels become their leaves, and a cyber-physical conduit of energy and information becomes the mycorrhizae that facilitate exchange. The underlying hypothesis is that informed exchanges of electricity between buildings at opportune times can increase the efficiency of demand response programs and the overall stability of microgrids. The main research questions are set forth as follows:

This project proposes to demonstrate the value and feasibility of this type of infrastructural framework by focusing first on the energy element and modeling a smart solar microgrid (SSM) of buildings after the way trees and plants produce and distribute resources through fungal mycorrhizal networks in a forest. Using real-world, appliance-level energy load and PV power production profiles from the Pecan Street project in Austin, TX, it will set out to simulate the performance of different SSM configurations by allowing hypothetical exchanges between various real solar-powered buildings. This will be done by creating a blockchain smart contract protocol on Solidity that interacts with the Ethereum Virtual Machine (EVM) [1]. Intelligent forecasting algorithms already defined in the literature [2,3] will be used to predict energy consumption and production values so that the smart contract can consider likely future states when facilitating an energy transaction between houses, and learn from past actions [4]. Once the predictive model is functional for predicting PV production and energy consumption in a single household, a two-household model will be created to understand the dynamics of energy exchange, diversity of load profiles, and their effect on grid stability. A three-house and then a three-building mixed-use model (residential/commercial/industrial) will then be built based on Pecan Street data and run on the EVM. Finally, if time and scalability allow a twelve building mixed-use model will be created and optimized to approximate the functionality of a full SSM. Results will be compared to existing blockchain-based DR programs for different combinations of building types and load profiles. Further discussions will include the interface with Texas’ existing ERCOT Grid, the addition of semi-centralized storage capacity and control, and the hybridization of the microgrid energy production mix.